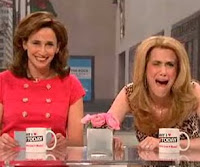 Unlike many out there, I still haven’t lost my faith in “Saturday Night Live.” It’s been on for 34 years now and every now and then it goes through a rough patch only to have a major comeback later on. But the announcement today that cast members Michaela Watkins and Casey Wilson would be fired after just one year as featured players was a big blow to my faith in the show.

To be fair, Wilson was funny, but never provided anything too special. Then again, she was on for just a year and she did show promise. Also, she had a few very good celebrity impressions up her sleeve (including a very accurate one of Christina Hendricks on “Mad Men.”
Most disappointing to me is the decision to fire Watkins. She was on for barely one season. Is that enough time for a person to show their true talents? She was definitely one of the best recent additions to the show, and I really looked forward to seeing more of her work this season. During her short lived SNL career, she did pretty brilliant impressions of Ariana Huffington and Joan Rivers. She also became well known for her obnoxious blogger character which a lot of people found annoying but I liked because I’m also an obnoxious blogger.
So far, no reason has been provided as to why they were fired. However, just last week it was announced that Jenny Slate and Nasim Pedrad would be joining the cast. I thought they’d be additions, not replacements. Maybe the reason for this firing was budget cuts. Or maybe Lorne Michaels is trying to get SNL back on track. If so, he’s doing so the wrong way. Although I still find SNL funny, the real problem is the writing, not the acting (in fact, this ensemble is one of the best in years). If Lorne really thought it was time to make some changes, he instead would’ve demoted the writing staff to Leno and gave these two promising newcomers a second chance.
This article is the closest thing to an explanation.
Share on Tumblr