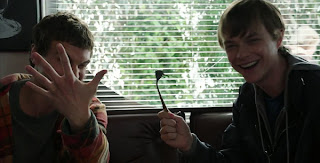 Apparently, when you put together two genres together that didn’t need another entry (superhero; found footage), something good can happen.
“Chronicle” is like taking a philosophy course, albeit an introductory one where you only go to half of the lectures. That doesn’t mean it isn’t intriguing, it just means that there could have been a little more substance to stick around for.

Like many found footage movies, “Chronicle” begins with a camera reflected in the mirror, looking directly back at the audience. Misfit Andrew Detmer (Dane DeHaan) uses his camera to block out the outside world, just as the lock on his door blocks out his drunk and abusive father from continuing to make his life miserable. His only real friend is his cousin Matt (Alex Russell), who drives him to school every morning and rambles on about reading Schopenhauer. In between philosophical lectures, he tells Andrew to put his camera away, and to actually start interacting with people.

At a party one night, Andrew meets his female counterpart, a blogger (Ashley Hinshaw), who also films the events around her, but with a purpose. Every male blogger in the world just found their new MPDG. Matt and Steve (Michael B. Jordan, no relation to the other Michael Jordan) find a strange hole out in the woods with a glowing light coming out of it, and they bring Andrew along to film it. They get a bit too close to the light and next thing they know, Andrew has to buy a new camera. 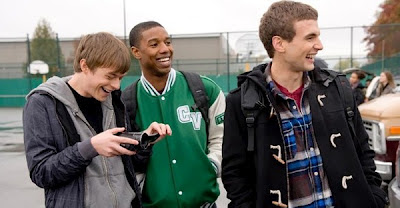 The switch in quality of Andrew’s camera is also the movie’s shift in story. After no explanation of what happened immediately after finding the light (perhaps for the better), the three friends find that they have obtained telepathic powers. Like the other recent found footage movie, “Project X,” the most realistic part of the movie occurs in its early stages. Like anyone with newfound super powers, they test out their abilities. And while Andrew could try and save his dying mother, he instead blows girls skirts up and messes with bullies. Because what else would a high schooler want to do?

The so-called “testing” portion takes up a seemingly long, but actually very short, time in the movie. These scenes showcase some of the most impressive special effects I have seen in a movie in a quite a while. Watching the Seattle Space Needle be built of Legos, and then get torn down, is a stunning visual, and it offers some terrifying foreshadowing. Another scene in which Andrew tears a spider to bits, makes you wonder both how it was made, and what it means. It definitely portends to his psychotic side. Not looking too deep into it, it is a mind-altering sight.

Unlike most superhero movies, the heroes aren’t fighting for some cause, or against some villain. Rather, they are fighting against themselves. When one obtains powers, both a hero and a villain are created within them. If I am understanding Schopenhauer right, then it is our personal will which one we will actually become. Perhaps the battle over control of their powers is just representative of the problems of teen angst. We’ve all gone through it, but not in this way.

“Chronicle” goes deep, but perhaps not deep enough. At times, director Josh Trank gets a little too caught up in the movie’s unique special effects, and forgets to push the story forward. However, we are given a disarming yet frightening performance by DeHaan, who with just his eyes can control our emotions the same way Malcolm McDowell did with his glare in “A Clockwork Orange.” At one point, Andrew describes himself as the apex predator: he is the top of the food chain, and therefore can do whatever needs to be done to survive. With great power comes great responsibility. This famous line from “Spider-Man” now makes absolute sense to me: when one obtains great power, they are responsible not just for what they do, but for whom they become. It is not just his slide into insanity that makes Andrew so disturbing, but rather the fact that he believes he is justified in his actions.

This is a very intense and absorbing moral dilemma. However, it leads to one of the film’s bigger problems: the complete disregard of all of the other moral dilemmas that could have come about. Andrew’s sick mother seems only to be in the plot as a means to anger his father more. But what would be the implications of Andrew both trying to kill his father, and save his mother? The world will never know. All we know is that he is a good son, and he tried. You’d think someone with telepathy would try a little bit harder.

The final battle is one to be remembered. The battle between cousins Andrew and Matt is very powerful, but would have been more so had the story delved into Matt further. Certainly, he is more complex than to serve simply as the good guy of “Chronicle.” In moral dilemmas, good guys shouldn’t be so easy to define.

Without giving too much away (because, I do hope readers go see this movie), “Chronicle” ends in an underwhelming way that is something of an injustice to the rest of the movie. While Matt seems to be doing a good thing in where he has gone to, a more ambiguous ending would have made a lot more sense here. Watching him fly off into the sunset, like a cowboy who can levitate, would have hammered the whole point across. The new powers the three friends obtain were supposed to make them more popular. In the end, great power is more alienating than no power at all.