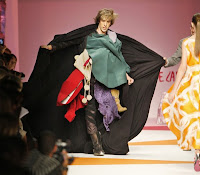 This week the second trailer for “Bruno,” what will likely be the best movie of the summer, was released. It’s not much different from the first trailer (with the exception of some more footage of his visit with Ron Paul and time on a talk show), but just seeing some footage from “Bruno” is enough to make my day. Already I see the velcro suit as a possibility for one of the funniest bits of slapstick comedy in years.

I will try my best not to overhype this thing. Then again, the trailer is just three minutes out of what is likely to be a 90 minute movie; so who knows what madness could ensue in the remaining 87 minutes. Lets hope that madness is filled with laughs and not yawns. Knowing Sacha Baron Cohen, it will likely be filled with laughs.
Here’s the second trailer:
Movie Trailers – Movies Blog