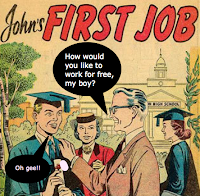 Anyone who has ever been in film school or just listened to an interview with a successful filmmaker knows that making it in the movie industry isn’t easy. Everyone starts off at the bottom and only those who work harder than everyone else will make it to the top.
Nowadays, a common start for many in the entertainment industry is to be an unpaid intern. Taking this position has both positive and negative connotations for ambitious twenty-somethings and college students. This issue hasn’t appeared in the news very much, until the recent “Black Swan” controversy. Two unpaid interns who worked for the film filed a lawsuit against Fox Searchlight Pictures, claiming the studio had them do work that could have been done by paid employees. They said that they weren’t given the educational experience that labor rules require in order to exempt employers from paying interns. Basically, they believe they were doing tasks anyone could have done and that Fox Searchlight did nothing to give them real on set experience.
Fox Searchlight fired back, claiming that the lawsuit is ‘meritless.’ They say the interns were hired by a different production company and that Fox Searchlight has “a proud history of supporting and fostering productive internships.” While this sounds more like the work of really vague PR as opposed to a truthful studio executive, this is not the point of this article. I am not looking to play a game of he said she said here, I would just like to discuss, and even defend, the larger issue at hand: how ethical the practice of hiring unpaid interns may or may not be.
From the start, hiring someone to do hours of work that someone should be making a good living off of seems wrong. It probably is. Believe it or not, getting into the film industry is more difficult than getting into most other professions. Being an intern is about getting your foot in the door in an industry where that door tends to close fast. Some production companies simply can’t afford to pay their interns a real salary, and those who are interning are volunteering their time. But what about multi-billion dollar companies like 20th Century Fox and NBC? Surely they can afford to pay for the extra help. Banks, financial companies, and accounting firms pay their interns. Those of you going into entertainment who worry about how much you are going to make from the get-go should be slapped with a giant paddle that reads “starving artist.”
I am sure that everyone looking for a job in entertainment has dreams of winning Oscars and making millions doing what they love. However, unlike the financial world, which is about turning money into more money, this business is about turning art into money. This is harder than it looks; no matter what marketers tell you, no simple formula can guarantee the success of your movie. Out of the box thinking and persistence are only parts of it; the rest of what makes your success is entirely up to you.
This is all coming from someone who is currently trying to break through, and is just about below the bottom of the totem pole. This summer, I had my first unpaid internship in the entertainment industry, so I approach this issue from a very personal angle. There are many great things that happened while I was there, and many of them I am not legally allowed to disclose. But I can say this: it was one of the most rewarding experiences of my life, in the best and worst ways possible.
Yes, there was a lot of what many would call “bitch work” involved. I indeed had to carry eight coffees by myself through Midtown Manhattan. You’d be surprised how many ways a door can be opened without the use of one’s hands.

When doing errands like that, it’s best to think of them from the larger rather than smaller perspective. Anything you can do for those working above you will make their lives easier and allow them to do better work for those in charge. The tiniest, most mundane tasks ultimately have a chain reaction effect. On most days though, something would be done that directly related to the movies being produced.
Those companies who take on unpaid interns should educate them in some form, and make their time worthwhile. I do not know whether or not Fox Searchlight actually fulfilled these requirements, but I do know this: as an intern, you must educate yourself. This is easy to accomplish: all you have to do is look around. As a filmmaker, you are a born observer, so just listen to those phone calls being made, and those secret industry terms being thrown around.
The real lesson to be taken out of the fallacy of this whole ordeal is that it breaks a cardinal rule of joining this industry: don’t be picky. It’s not about which opportunity is going to pay you the most, its about which one is going to take you the most places.
Share on Tumblr