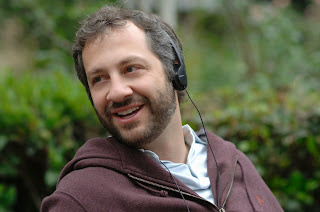 
And the fourth face on Mount Rushmore of Jewish Comedians is Judd Apatow.

Unlike Mel Brooks, Woody Allen, and Larry David, Apatow’s work is done almost exclusively behind the camera. Yet, he is one of the most recognizable faces in Hollywood. That is most likely because he is so good at what he does.

Judd has had a long history of comedy. You could call him the original podcaster, as he used to get private interviews with comedians for his high school radio station. He interviewed such big names as Steven Wright, Garry Shandling (whom he would later work with), and Jerry Seinfeld.

Since his early years of struggle, Apatow has become the go-to writer/director/producer of good comedy in Hollywood. His first two efforts in the director’s chair, “The 40-Year-Old Virgin” and “Knocked Up,” were master classes in free flowing hilarity. They turned two possibly unlikable leads into lovable anti-heroes. He made the Jewish Schlub into an archetype, made Seth Rogen a star, and thought of some genius one-liners along the way (“well you still have a tiny dick, Cartman”). Apatow has received mixed reviews for “Funny People” and “This is 40,” but I give him all the credit in the world for his insatiable ambition.

Part of comedy is about helping others, and Apatow has made a career of just that. Some of the people he has helped propel to stardom include Seth Rogen, James Franco, Steve Carell, Kristen Melissa McCarthy, Jason Segel, and Lena Dunham. This is just a few of the many names. Apatow simply has an eye for talent unparalleled in the comedy world (except maybe for Lorne Michaels). There is something special about having an eye for good talent, and then using your own power to help that person out. It takes a lot of self-confidence to know that you have found someone good, and a lot of heart to dedicate that much time to a person. Judd is a mensch of the finest order.

Judd Apatow has always been my gateway into comedy. In 2007, the magical year in which both “Knocked Up” and “Superbad” came out, comedy nerdom came full swing. I also didn’t even realize that he was influencing me from such a young age: Judd Apatow wrote “Heavyweights.” Yes, you heard me correctly. That movie where a bunch of Jewish kids (ex: Josh Birnbaum) from Long Island (“never heard of it!”) go to sleep away camp. If anyone gets the humor of the Jewish identity, it is Judd Apatow.

Fun Fact: Judd Apatow was born in Flushing and raised in Syosset. He probably knows your cousin.