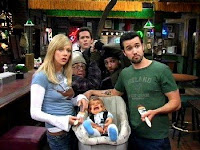 Something peculiar happened as I began watching It’s Always Sunny In Philadelphia. It began funny, taking on some controversial topics (abortion, racism) that had already been mocked before in somewhat of an original way. Then suddenly, as the show departed from season 1 and turned into season 2, things totally turned around. The show started covering new ground and transformed into one of the funniest shows currently on TV.

It’s Always Sunny is a show about nothing. Sound familiar? Well, much of this show takes after it’s obvious influence, Seinfeld. The characters are no different than Jerry, Elaine, George, and Kramer either. Dennis (Glenn Howerton) is the self-centered, pretty boy owner of an Irish pub in South Philly. He owns the bar with his sister, Dee (Kaitlin Olson), a former UPenn girl whose constantly trying to outdo her brother. Also part of the bar business is Mac (creator Rob McElhenney) who gets jealous that he was the only one not molested by his school gym teacher. Finally, there’s Charlie (Charlie Day), their dim-witted friend who can’t tell Israel from India. The show follows their ridiculous encounters and mistrials of their unsuccessful bar.
It’s Always Sunny proves that you don’t have to be on HBO to be dirty. Airing on FX, the show can seem a bit much for network TV. It’s a big f*** you to the FCC. Not just for the repeated use of the seemingly banned from network television word “shit”, but for the topics few even dare to touch on. Who ever thought a racist old Nazi could be so funny?
It’s Always Sunny asks many strange ethical questions one never wants to deal with or ever wants to know about, but these four people must deal with it all the time. What do you do when you find you’re best friend’s grandpa’s Nazi uniform? Is pretending to be a crackhead the best way to qualify for a big, fat welfare check? Is it possible to get a girl to like you by telling her you have cancer?
Like I mentioned, this show is extremely similar to Seinfeld. The comparison draws from the idea of having a show that has absolutely no plot but just follows a bunch of random, selfish human beings around that are so undeniably like ourselves that it is impossible to watch, yet it’s so funny and shocking at times that it’s nearly impossible to look away. Basically, It’s Always Sunny is like passing a car accident on the highway, only funnier.
It’s Always Sunny in Philadelphia is Seinfeld for the new millennium. You could say Curb Your Enthusiasm had taken that title already, but that show is possibly beginning to wind down already. It’s Philadelphia’s time now. Hopefully, that time will be at the Emmys someday soon. After all, every loser has their day. And Dennis, Charlie, Mac, and Dee I’m sorry to say, are losers. Losers I’d love to follow for a few more seasons to come.
So, while the main concept behind It’s Always Sunny doesn’t break any new ground, the ideas circulated into each episode does, and that is what helps make one of the most consistently hilarious and original shows on TV right now.
It’s Always Sunny in Philadelphia starts up again for it’s fourth season on FX on Thursday, September 18 at 10 PM. Please watch it, if you dare…
Recommended for fans of: Seinfeld, Curb Your Enthusiasm, Arrested Development, 30 Rock, Scrubs
Share on Tumblr