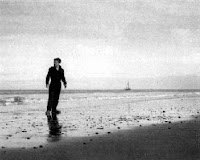 When “The 400 Blows” opened in 1959, it delivered more than 400 blows to everything people loved and cherished so much in cinema. It changed the way a story could be told on screen. No more formal structure. No more conclusive endings. Just…life.

“The 400 Blows,” a pivotal film from the French New Wave, is short in length yet deep in content. It follows Antoine (Jean-Pierre Leaud), a delinquent of a child whose stealing money and telling lies when he’s not being abused by his overbearing parents or his overly controlling and abusive teacher. Antoine is something of a young Cool Hand Luke wearing a Terry Malloy jacket: he commits crimes yet struggles with remorse; he makes petty crimes seem somewhat stylish.
Like Luke, Antoine tries many failed attempts at escaping his wretched life. The great paradox of the film lies within the fact that the more and more Antoine is put in chains, the more and more free he ultimately comes. This paradox is no more apparent than in the iconic final shot, as Antoine gazes at both freedom and confusion.
“The 400 Blows” is perhaps the pinnacle of the French New Wave; a post WWII film movement which embraced the iconoclasm and rebellion from society’s typical ideals. Not only was the New Wave breaking free from the burden’s of society, but also the burden’s of typical, mainstream filmmaking. Nowhere is this more apparent than in “The 400 Blows.” Francois Truffaut takes him time telling the story, and it is time well spent.
Truffaut doesn’t rush through events, no matter how insignificant. Maybe watching Antoine drink an entire bottle of stolen milk doesn’t move the plot along, but it reveals certain, small things about the life of the character. Most important is the nearly three minutes Truffaut spends capturing Antoine wandering through miles of countryside. Three minutes may be short in reality, but it could feel like an eternity in the film world. Three minutes is an especially long time to capture someone walking. However, I felt like this dialogue free scene could’ve gone on for hours and I wouldn’t have minded because of the way every tiny detail is captured. There is the background score, the way in which Antoine carefully yet cavalierly wanders, or the breathtaking scenery.
This attention to small detail could be considered a turning point in filmmaking. While many movies simply move along as quickly as they can to reach the conclusion, “The 400 Blows” takes it time and doesn’t quite care when it arrives because frankly, Antoine doesn’t quite care when he arrives, just as long as he is going somewhere.
Perhaps I am over-exaggerating the film’s breakthroughs. Perhaps many films before it tried the same new style, yet no matter what, “The 400 Blows” achieves to perfection. It is one of the few movies you will ever see that contains so little action yet is so exciting, one that is pushed along not by events, but by people.
Share on Tumblr