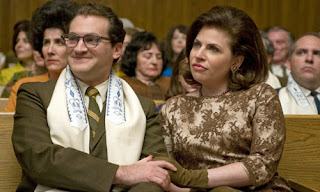 This is a ser- I’m a ser- I’m, uh, I’ve tried to be a serious man, you know? Tried to do right, be a member of the community, raise the- Danny, Sarah, they both go to school, Hebrew school, a good breakfast…


“A Serious Man” begins with the blast of Jefferson Airplane’s “Somebody to Love,” linking the past to the present, and drowning out a dull Hebrew school lesson. In this day and age, what does it mean for a Jewish man to be a serious man? If you are looking for a movie that is both religiously faithful and an existential mind trip for the halfway point of Hanukkah, then look no further. This is the first and probably the last movie you’ll ever see that’s based on both the Talmud and Schrodinger’s Cat.

Who else could have made a movie like this than Joel and Ethan Coen. It is based partly on their own childhood growing up in a Jewish family in a mostly Jewish suburb of Minneapolis, and the rest is a lot of things that could have happened, but probably didn’t. “A Serious Man” begins with a short parable that takes place in a shtetl. It might explain every one of the following events we see, or none of them. Maybe it is what the Coen Brothers say it is: their attempt to create their own Jewish fable. The rest of the movie focuses on Larry Gopnik (Michael Stuhlbarg), a father who goes through a crisis of faith after his wife leaves him and he begins to lose his children to the 60s. No one, not even a string of rabbis, can provide him with guidance.

“A Serious Man” is funny not in a haha kind of way, but more in the kind of way that if you watch it multiple times, the ultimate mind f**k of it all is kind of hilarious. This is the Thinking Man Jew’s kind of movie. And that is not to say that anyone can’t like this movie. However, some people might not appreciate “The Goy’s Teeth” quite as much. For those who are passionate people watchers, especially of the Jewish kind, this movie gives a prototype of every Jew you can think of. Some will find stereotypes, others will find hilarious objects of affection.

“A Serious Man” definitely will not inspire as much joy and laughter after a candle lighting as say, a Woody Allen or a Marx Brothers movie, but it will definitely inspire fervent debate and conversation. If you are really curious about what that cut to black at the end means, I only have so many answers. Instead, I would refresh on your Bar Mitzvah torah portions. And then pick up some physics textbooks. Philosophy might work, too.

If this movie makes you crave for from the Coen Brothers tonight, I would check out “The Big Lebowski” immediately afterwards. It’s a great movie but that’s just like, my opinion, man.