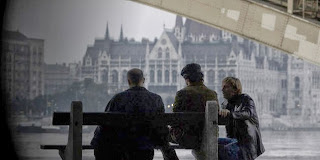 Spielberg had to appear on this list one of these nights. So why didn’t I include “Schindler’s List,” cinema’s most thoughtful portrayal of the Holocaust, or “Saving Private Ryan” which I learned in Hebrew school has something to do with Jewish values? It wouldn’t take a post from me to get you to watch either of those. However, six years after being released, no one seems to want to watch “Munich.” It’s a depressing subject for sure, but it its also as captivating a political allegory as it is a thrilling and suspenseful film.

“Munich” is based on the tragic events surrounding the 1972 Munich Olympics, in which members of the Israeli Olympic team were kidnapped and subsequently murdered by Palestinian terrorists. Spielberg recaptures the terrifying image of a hooded kidnapper standing on a terrace, and the chilling line said by a news anchor, “they’re all gone.” In response, the Israeli government assembles a team of Mossad agents to target and kill the terrorists. The team includes Eric Bana as the conscience-ridden Avner, as well as Daniel Craig and Ciaran Hinds.

When “Munich” was first released, it was greeted with much controversy. Many claimed the film, a work of historical fiction, to be anti-Israel. To believe that such a devoted, charitable Jew as Spielberg would ever make a film against his spiritual homeland is as ridiculous as the alien spaceship emerging out of the ground at the end of “Indiana Jones and the Kingdom of the Crystal Skull.”

While “Munich” does suggest that perhaps some of the people killed might not have been involved in the kidnapping, and at one point it does allow one of the terrorists to speak, this is not saying that Israel should not exist. It is rather a universal statement as old as time about the dangerous tole that revenge takes on the individual and that in the terrible Israeli-Palestinian conflict, both sides forget that we both bleed the same blood. In today’s polarized political environment, saying that both sides could be at fault is a small miracle.

Politics aside, “Munich” is something that few acknowledge it to be: an extremely well-made thriller based on the principles of film in the era that Spielberg first began working in (1970s) and the filmmakers of the past that inspired him (Hitchcock). One scene involving a phone, a bomb, and a little girl, will have you at the edge of your seat, begging you to wonder how it could possibly end.

One of Spielberg’s greatest pitfalls throughout his career is how easily he can fall into the trap of sentimentality. “Munich” is another one of his film’s about the importance of family, but it never falls into the trap of sentimentality. The ending is hardened, but also very thoughtful. “Munich” will evoke an intense political and theological discussion on this seventh night of Hanukkah but above all, everyone will enjoy the fact that for once, the Jews are the ones who are doing the ass kicking.