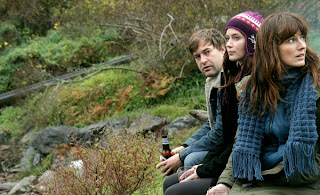 “Your Sister’s Sister” opens with an unusual eulogy. Jack’s (Mark Duplass) brother Tom died one year earlier, and friends and family gather to honor him. But Jack isn’t satisfied with all of the kind words, as Tom was a jerk who acted kind to get ahead. And for that, Jack respects him. This is mainly what “Your Sister’s Sister” is: a lot of people talking about what they think is wrong about conventional wisdom. And if you can tell from this first scene that you won’t like this, then you can get out.

In “Your Sister’s Sister,” the characters talk. And they talk. And then they talk some more. It is the very definition of Mumblecore. However, Mumblecore is a terrible name. The characters aren’t mumbling and bumbling about nothing, they are actually having deeply thought out, entirely realistic conversations.

Duplass, in his second great performance of the summer (the other being “Safety Not Guaranteed,” also set in the Evergreen State), plays lovable jerk Jack. As goes the indie movie formula (in which all characters in any film are in some kind of rut), Jack is in a rut. He’s mentally unstable and not financially secure. Understanding his unease, his platonic best friend, Iris (Emily Blunt), suggests he ride his red bike out to her parents’ isolated vacation house and do some soul searching. But alone time isn’t going to work for him. When he shows up, Iris’s sister, Hannah (Rosemarie DeWitt) is already there. Naturally, Jack is a little too awkward to just ring the doorbell, and naturally Hannah is going to freak out about a random stranger looking at her through the window.

According to common film knowledge, no platonic friendship between a man and a woman can exist without a little sexual tension. But we’ll get to that after Jack and Hannah drown their sorrows in a bottle of tequila. Hannah is a lesbian and just went through a bad breakup, but that doesn’t stop her from sleeping with Jack.

Things get awkward when Iris shows up for a surprise visit.

While watching “Your Sister’s Sister,” I wasn’t always sure if I was actually watching a film; more often, it felt like a play. Other times, it just felt like snippets of real life. Besides the opening and a few scenes in the woods, the whole story essentially takes place in one location. There couldn’t have been a more intimate, and often uncomfortable, way to get to know these characters. In such a short span of time, we learn more than we probably have any right to know. We learn about all of their insecurities, including Iris’s weakness for guys with skinny jeans, as well as her love for Jack. But if you were looking for something worse than that, Hannah is a vegan. As the film will show, anyone who is on a strict diet of dried up bananas needs to eat a dollop of butter every once in a while.

“Your Sister’s Sister” director Lynn Shelton that also scripted the film, though the dialogue was mostly improvised. Shelton’s last film was the Sundance hit “Humpday.” That was another film about a platonic friendship gone too far. Shelton’s films stand out because she takes odd relationships and makes them normal. She lets the characters be honest and be themselves, and she does that by staying as far away from them as possible. “Your Sister’s Sister” is 90 minutes of conversation, and it ends up being profound because it is so realistic. It never sounds like a bunch of actors reading off lines from a script, but rather like friends and family who have known each other far longer than we have known them.

At times, Shelton takes on qualities of Woody Allen. There are many still, long takes, which last minutes at a time. If something is going well, then it will not be disturbed. Part of the watchability is also in part to the chemistry between the actors. Blunt is allowed to shine here and show subtle humor and a kindness in her demeanor even when some of her actions may seem selfish. DeWitt and Duplass (who I sometimes like more as an actor than a director) hit it off instantaneously because they both seem open and willing to do anything in their work. Each character has some sort of secret shared with another character, and all three of them serve as puzzle pieces in a web of unexposed truths. Even with all of the talking, “Your Sister’s Sister” is actually about something. “Your Sister’s Sister” is a funny film because Lynn Shelton is an effortlessly funny storyteller. However, she is never trying to be. The humor comes out at very small, very brief moments, and it all depends on how you can relate to it. In a scene in which Jack and Iris sleep in the same bed, they find each other waking up to the other’s feet in their face. I personally happen to find this idea very funny, and the fact that they eventually laugh it off and shrug it off is so perfectly in character for the two of them.

I will not give anything away, because I very much hope you go to see this film, but all I will say is that it ends on a note that will intrigue some and anger many others. At first, I felt unsatisfied. But then, I realized it had to end that way. There is no way this story could end with any audience member feeling totally satisfied by knowing everything. In an interview, Duplass, describing his approach to filmmaking, described his love of documentaries and that they often capture the best moments unintentionally and with the worst quality. He says he applies that to narrative films and in a way, Lynn Shelton puts that ideology to good use. In one way, the entire film is saying that there are certain details in life that are better left unknown. Therefore, the viewer too can remain partially in the dark.

Even though the characters talk so much, they come to realize that there is still so much unsaid. As one of the more inventive love triangles I have seen, I could listen to the characters of “Your Sister’s Sister” talk all day.