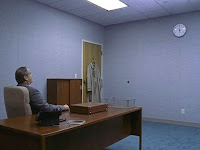 It’s almost 5 o’clock on some weekday and Warren Schmidt (Jack Nicholson) is on his last day of work before retirement. He’s not so much paying attention to the paperwork on his desk, but rather for the very second that the clock strikes 5 PM and he’s a free man. Then again, this was probably what every single day of work was like for him.

I think it would be a gross generalization to say that Warren Schmidt, the titular character of “About Schmidt” is no different from me and you, as there are many things that make me and you different. Rather, he begins the movie with no unique characteristics to establish him. He is vice president of an insurance company, working in a blank office in a plain, white skyscraper. Later, we will find out this was never the job he hoped to end up with.
Warren then goes home every day from work to a wife (June Squibb) he doesn’t think he loves enough and a daughter (Hope Davis) who is marrying a deadbeat (Dermot Mulroney). The Schmidt household is a picture of lost potential.
Warren’s life post-retirement has come down to a single Winnebago, the one he will drive cross country to his daughter’s wedding. But Mrs. Schmidt suddenly, inexplicably, drops dead. This drives Warren into a second, even worse rut. But still, he must embark on that cross country road trip. Most say that long trips are best made with a companion. Well its a long road to Denver, and the only thing accompanying Warren are his thoughts.
“About Schmidt,” like just about every other Alexander Payne movie, boils down to a road trip. While his films are usually about how friends or family resolve their differences on the road, making Warren go it alone shows that this is truly a film about a man who doesn’t only need to redeem himself in the eyes of his family, but rather he must redeem himself in his own eyes. That’s why when he begins writing letters to a boy he adopted from Africa, it sounds a lot like he’s talking to himself.

“About Schmidt” certainly isn’t Payne’s best film. No, that honor still belongs to the twisted “Election.” Yet, it captures an essence and a feeling that all of his films try to convey better than anything he has ever done. “About Schmidt” shows that the idea of America lies on the road. This is a country of people who feel the need to explore, from the pioneers to Warren Schmidt. This might sound like too much of an overanalysis but once you see this movie, it’ll make sense.
“About Schmidt” shows in finest form that Payne and his frequent co-writer, Jim Taylor, know how to write natural sounding dialogue like few others working today can. The conversations feel colloquial yet relatable. No matter what, “About Schmidt” always gives off a warm, welcoming vibe, even when the characters act totally detestable.
Usually, a lone road trip would seem dull, and more like in-between time between big scenes rather than an entire movie. But Payne makes Schmidt’s trip a deep, introspective one. While most road trip stories are interesting for what the characters see, this one is most interesting for who our character meets along the way, and the moments they all share together. There is something about the kindness of strangers that can make someone want to tell them anything. Or that is, if you don’t feel comfortable saying anything to your own family.
I said it once before in my review of “The Descendants” that Payne can get established actors to go totally against type, and deliver some of their finest work. Jack Nicholson’s most familiar character is a loud, outcast rebel. In “About Schmidt,” he plays someone facing the consequences of a life of not taking any risks. It is a quieter performance than we are used to seeing from him. He unlocks something in the character that no other actor could in that he takes someone who is so plain and unextraordinary and makes him vibrant and extraordinary. Then, when he finally realizes how little time he has left, and how much of life there is to enjoy, his revelation feels earned rather than contrived.
For that main reason, the ending of “About Schmidt” feels right when it could’ve felt wrong. I am not saying that “About Schmidt” is going to change your life, as that is not the point of it. Rather, it might just make you want to look around, appreciate where your from, and then do something you wouldn’t normally do. How often does that happen?
Share on Tumblr